Best of the Fest

Hellloooo Beerfest Asia 2011! Today was Day One of the third annual Beerfest Asia in Singapore and what a start it was! We headed down to the Marina Promenade earlier today to catch a sneak preview of this year’s awesome line up of some of the world’s best beers all under one tent. All we can say is that we left extremely happy, high and satiated…here are some highlights!

With more than 20 exhibitors offering over 300 different kinds of commercial and craft beers hailing from countries as distant as the Czech Republic, Russia and even Mongolia, there is bound to be something for every thirsty reveller.

Some of our favourite exhibitors include The Drinking Partners, which carries a fabulous range of Belgium Beers including the much sought after Delirium Tremens and Trappistes Rochefort 10, Liquid Luxury, which specializes in exclusive ultra-premium wines, spirits and liqueurs (try their Ginger Beer), and Eastern Craft Trading, which has some of Japan’s best craft beers like Hitachino Nest. We especially loved their Chocolate Weizen and their Nagoya Red Miso Lager. 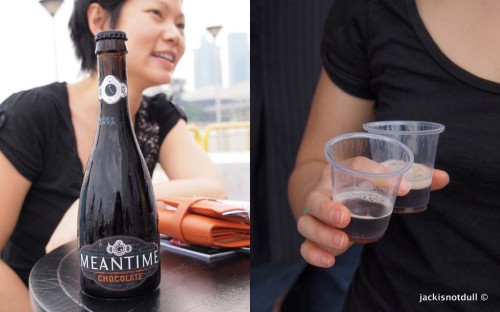 Over the four days of festivities, Beerfest revellers can also look forward to a whole host of entertainment that includes two music stages playing tribute to Rock and Blues legends such as Queen, U2, The Beatles, The Rolling Stones and The Blues Brothers, an international stand-up comedy line-up and many fun games and contests.

Tickets are still available from SISTIC and at the door.

3 responses to “Best of the Fest”