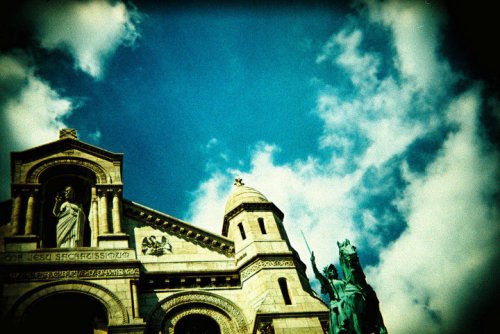 A good friend recently lamented that she has fallen out of love with photography. Because we have all been spoilt rotten by digital cameras.

Unlike digital photography where shooting can be mindless, gratification instant and mistakes covered up and transformed into art, it takes a true devotee to capture on film the perfect moment. Analogue film photography is a journey, of discipline, of conviction, of timing, of patience, of skill and sometimes of luck. It’s thinking; it’s set-up. Without thought, not only do you spend the film, you lose the moment. One of the beauties of film photography is the hope, faith and anticipation of fruition while waiting for the roll of film to return. Sometimes the results surprise but always, they are well worth the wait. 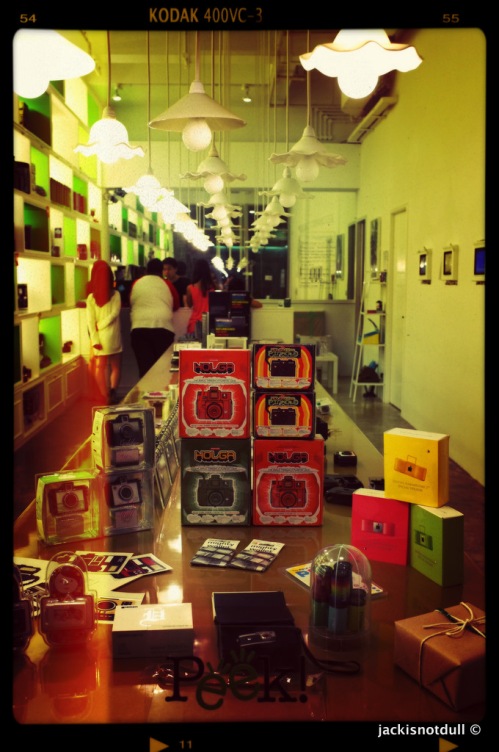 It is for this love of film photography that Peek! was created almost exactly a year ago. Joanne Lim’s first love was a Diana F+, a toy camera by Lomography. Dismayed by the unavailability of similar toy cameras, accessories, parts and specialist knowledge in Singapore, Joanne started Peek! with the ambition of re-igniting the romanticism of film photography by bringing unique cameras and specialist knowledge and service to photographic communities both local and regional.

Peek! is located in a 2-storey shop in the Armenian Street art district. The first storey houses an eye-boggling array of quirky toy cameras guaranteed to turn you into a child in a candy store, while the upstairs contains an ambient and even shrine-like space that pays homage to Polaroid cameras. Peek! carries about 30 makes of analogue film and digital toy cameras and Polaroid cameras, with prices ranging from SGD20 (a self-assembled plastic camera) to SGD630 (the Horizon Perfekt).

Here are the ones that caught Jack’s roving eyes: 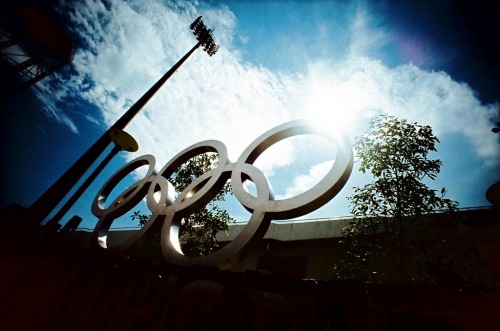 The Lomo LC-Wide is Lomography’s wide angle take on an old Soviet classic. This 35mm compact camera has a 17mm wide angle lens that allows the spy in you to capture a much wider field of view, which means that more will be in focus. Beneath its understated exterior, this camera is a powerhouse – it’s a must-must-have for its stunning vignettes, intense colors, light weight and ruggedness.

What baited Jack next is the La Sardina, a plastic 35mm camera also by Lomography inspired by vintage sardine cans. It is a point and shoot camera, equipped with a multiple exposure switch, a super-wide lens and an eye-popping flash that will ensure a good catch of mouth-watering Lomographs easily. 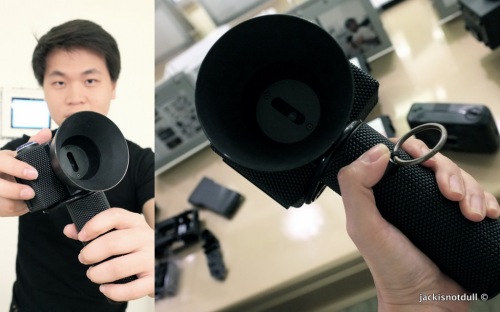 The Spinner 360° is a curious looking camera. Almost grenade-like complete with ripcord, we were very tentative about handling. Turns out the Spinner 360° captures 360° panoramas on a strip of 35mm film in one quick spin. You need one steady hand to hold the Spinner and the other to tug and release the cord – the camera spins 360° around its own axis, pulling the film along and recording the world onto a 9-inch frame often with outrageous and unpredictable effects.

We couldn’t help but smile at this wacky camera! The Holga 135TIM is a half frame camera has two “eyes” that are really two lenses. It allows you to shoot half a frame with (the camera’s!) one eye open, or two half frames with both eyes open which means shots can be composed left half frame first, right half frame first, or both left and right at the same time for a stereoscopic full frame. Jack recommends you first sort out which of your own eye to shut while shooting before you progress to the 135TIM – not so ideal for the coordination challenged!

This being a half frame camera means you get double the number of exposures on 35mm film (that is 72 shots on a roll of 36) all with classic Holga quality – dreamy and charged with personality and mood. 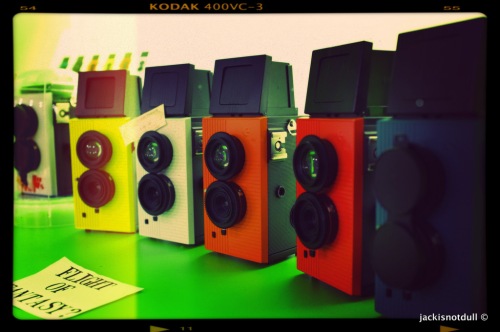 The Blackbird, Fly is a Twin Lens Reflex (TLR) camera that has an objective lens for taking the photograph and another for the top-down viewfinder. To shoot, the camera is held at waist-level. We don’t really care that it uses the standard and ubiquitous 35mm film instead of the rare and almost obsolete 120mm film format like many TLRs do; we just adore it for being such a hip camera!

Would you believe that this cool cat is a camera? Only 40 grams, this kitty sports a lens hidden in one eye, a self-timer, an interval mode and tiny magnetic feet, perfect for hiding in inconspicuous spots to capture those sneaky spontaneous shots of unsuspecting victims (just don’t let the cat out of the bag to too many people!). His other eye is actually the LED indicator for the self-timer, and tucked in the kitty’s belly are a USB port and a microSD card to store videos and still images. With credentials like this, it is no doubt Jack’s pet camera! 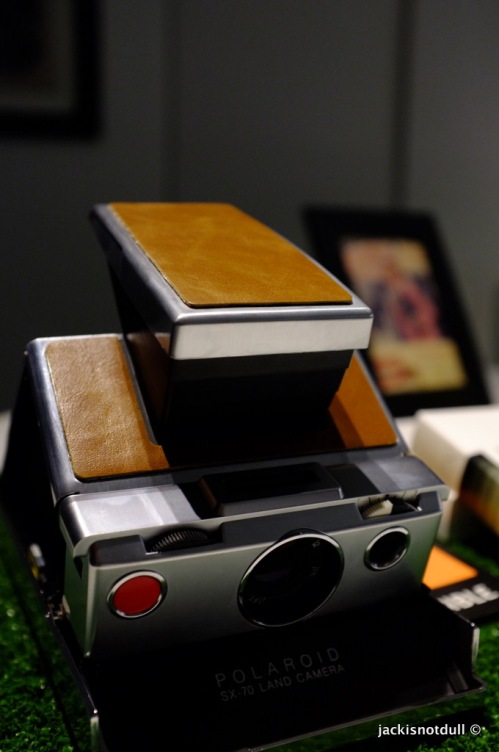 The Polaroid SX-70 was the world’s first instant SLR. Like millions of users worldwide, we love it for its sophisticated engineering that made it ahead of its time, its classic good looks and its elegant fold-down into a sleek and compact rectangular design about an inch thick that’s brilliant for portability.

So dear good friend, with so many choices so close to home, we think it’s time you pay Peek! a visit.

Afterword: Jack.D abashedly admits she has not ventured into film photography but promises to herself to. All pictures from toy cameras and Polaroid camera were provided by Peek! All pictures of Peek! and cameras were shot with the X100 and edited for hours. No film had been harmed in this process.