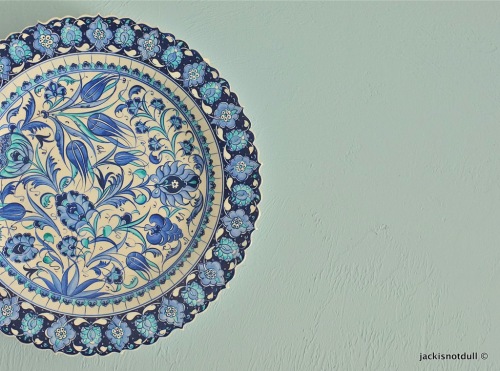 As Greece teeters on the brink of default on its debt and many ponder the possible fall-out of the Eurozone and the fate of the euro, some say perhaps it’s time to let Greece go. At Blu Kouzina, we found ourselves succumbing to a different form of let-go.

Blu Kouzina is a Greek restaurant owned by Effie and Dennis Tsakiris and housed in a 4-storey building in Bukit Timah, Singapore. The restaurant has an alfresco section at the front, but we choose a table indoors to escape the sweltering mid-day heat. Upon arrival, we were greeted with warm hellos and sunny smiles, and promptly ushered past the compact but well-utilized space on the ground floor, where the kitchen was a flurry of activity whipping up all sorts of Greek goodness, and up the staircase at the back. 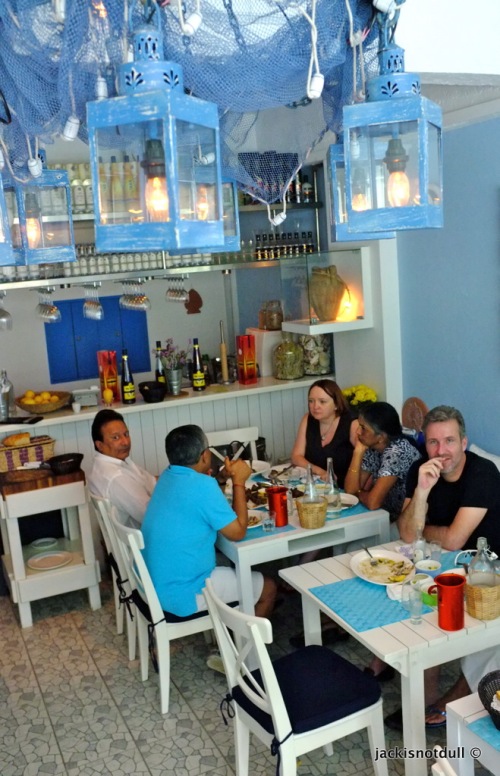 The decision to sit indoors turned out to be a wise one. The second floor dining room is dressed in classic Greek blue and white hues. From the whitewashed wooden tables and chairs, to the powder blue chandelier made with vintage nautical lanterns and fishing net, the room emanated a cheery Mediterranean seaside vibe and immediately received our unanimous nods of approval.

The menu has a decent selection of starters, grilled meat, seafood, chicken and Greek classics like Mousaka. Many of the dishes feature feta cheese and the Green Gold extra virgin olive oil made from organic olives handpicked from the Tsakiris Family Estate in the hills of Messinea, Greece.

After too many minutes of feverish discussion overdosed with girly indecisiveness and greed, we decided on the following ensemble: 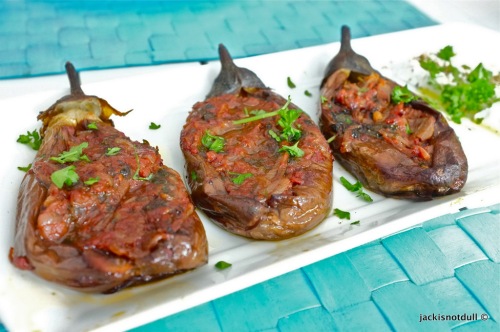 Iman Baildi, described somewhat esoterically on the menu as “eggplant filled with eggplant and tomato”, piqued our interest enough for an order. Turned out this dish was as literal as described, grilled eggplant halved and filled with generous toppings of minced tomatoes and onions. It came with a small side of feta cheese. The eggplant was grilled to a moist tenderness just before becoming mushy, retaining that crucial texture that saves many a grilled eggplant from a residency at The Overcooked Eggplant Hall of Shame. The mild bitterness of the eggplant was pacified by the sweetness of the tomatoes and onions, which was enhanced by the saltiness of the feta cheese when savoured together. My request for feedback round the table elicited only mumblings of “yummy” from the mouths that were all too busy chomping down the food. Yup, friends I could rely on. 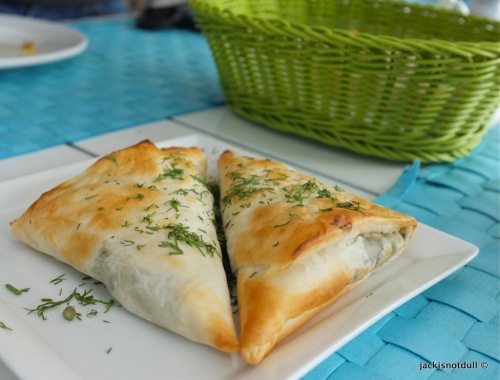 Starter No. 2 was the Spanakopita. The medium sized triangles of phyllo pastry, baked to a touch of golden brown, were light and crisp on the outside while the filling was a comforting creamy mix of spinach, feta cheese and herbs. Served simply with a scatter of dill, it was sheer delight in every bite.

The Grilled Feta, another classic Greek meze, arrived in an aluminum foil package. Unwrapping the foil revealed a 4 by 3-inch rectangle of feta cheese grilled with a dribble of extra virgin olive oil and a sprinkling of oregano. The garnish of chili slices added colour to the otherwise plain looking dish, but hardly did a thing in spicing up the flavour of the dish. The cheese was warm and soft from the grill and salty from the brine it was aged in. Overall, we found the cheese underwhelming after the excitement of our first two starters. 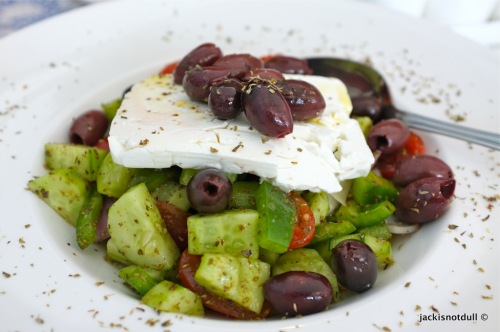 While we were being wishy-washy over our orders earlier, our friendly waiter managed to slip in an order of Xoriatiki in our moment of vulnerability. This Greek salad turned out to be surprising good. A harmony of olives, tomatoes, cucumbers, green peppers and red onions, tossed with aplomb in extra virgin olive oil and organic vinegar and capped with more feta cheese and oregano – divine! The freshness of the produce was accentuated by the dressing of vinegar and extra virgin olive oil, which was very clean and elegant on the tongue carrying distinct notes of fresh cut grass. 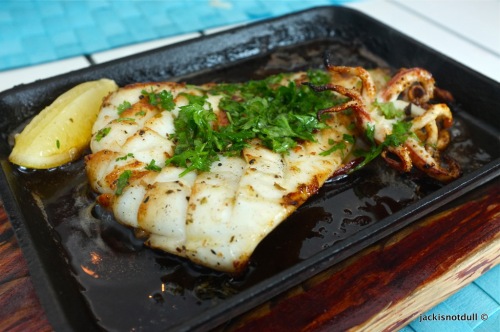 The Grilled Squid washed ashore next on a hot plate. The meat was fresh and succulent, and especially scrumptious at the well-charred bits; each bite bringing a taste of the salty seas. It was squid done so simply yet more than adequately. Warning: Can be extremely addictive.

And just as we were catching our breath, our grilled meat platter arrived. Shrugging off looks of part disbelief part envy from neighbouring tables, we tucked heartily into our party pack of meatballs, beef patties, lamb chops and beef kalamaki with a handful of fries strewn on top.

The grilled lamb chops were smoky and succulent, and the clear leader of the pack judging by how fast they went. Meat here is well done as how the Greeks like it, though we prefer to see red. The beef kalamaki (beef chunks on skewers) while robust in taste, we found to be slightly too dry and chewy. A generous dollop of the accompanying Greek yoghurt solved that problem in one quick dip. The meatballs were tastily seasoned but perhaps a little too crumbly too lean. The beef patty baffled us as it seemed to be an upsized version of the meatball. Never mind belt-tightening and austerity measures, we shall leave no meat unturned!

Even though we didn’t make it to dessert, I think Adephagia would have been proud of our showing.

In between sighs of satisfaction, we spied a platter of grilled seafood with massive prawns delivered to the lucky couple beside us. Mental note to self: order.gargantuan.prawns.next.time.