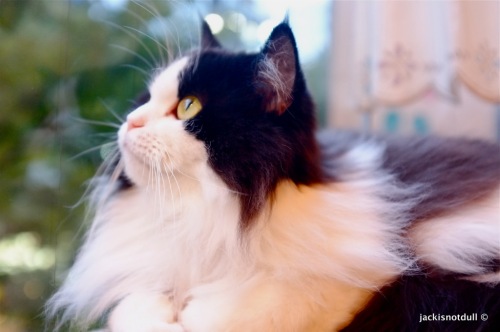 Yes, literally. Tokyo never fails to amaze me with her eclectic mix of cafes and today I was pleased to discover yet another hidden gem. I spent a wonderful half hour at Hapineko in Dogenzaka, Shibuya, a cafe where guests chill out in the company of cats.

Hapineko is on the 3rd floor of Kuratosu Building in Dogenzaka, a short walk from the Hachiko exit of Shibuya Station. The cafe is set up like a Japanese living room with low tables, sofas and tatami mats, and floor-to-ceiling windows staring out into the large trees lining the street.

Hapineko charges 525 yen for each 30 min block of play time with the cats and another obligatory 525 yen for a drink (selection of tea, coffee, juices) and a token snack. As guests are to be in close contact with the cats, the cafe is very strict on hygiene and handling of the animals. At reception, I was first informed of cafe proprieties and how to treat the cats with due respect and care. Next, I was asked to remove my shoes, scrub my hands down and sanitize them with alcohol, before being allowed into the room where the cats were.

Hapineko has a staff of 16 simply adorable cats who are rotated for residency at the cafe. The cats are around three to four years old and include a Persian, a Russian Blue, a Berman, a British Shorthair, American Shorthairs, Scottish Folds and several crosses, all girls except the Berman. It’s really hard not to fall in love with these beautiful creatures.

Here are the pussies I played with today. 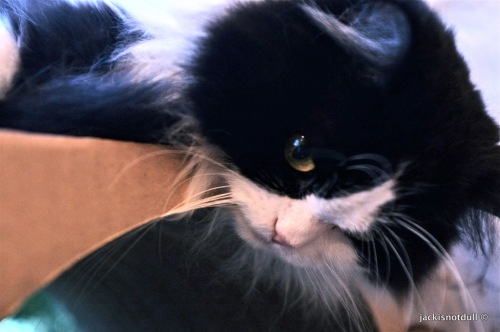 Milk is a long-haired Scottish Fold, born in August 2008. She is a black-and-white hairball with a dreamy gaze, and quite the poseur too. The original Scottish Fold has a natural dominant-gene mutation that makes its ear cartilage contain a fold, causing the ears to bend forward and down towards the front of its head, giving the cat an “owl-like” appearance. After decades of out-crossing, Scottish Folds are now also bred straight-eared. 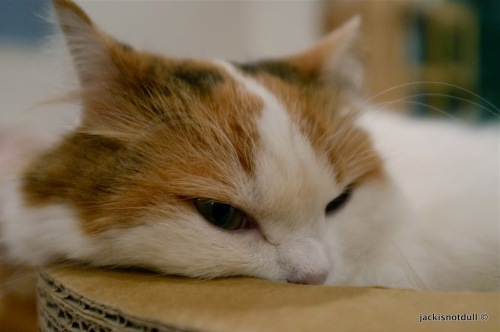 Comomo is a very sweet-natured 3-year-old Scottish Fold. The brown-and-white dame was snoozing in bed the entire time I was there, stirring only when I gave her a tickle on the head. She really enjoyed her back rub. Can you tell she was my favourite? She really had me purring like a kitten!

Princess Pudding. Don’t you just love her name? Persian and all of three years old, Princess Pudding is a gorgeous ball of fluff who was contented to sleep the afternoon away. Persians are characterized by their round face and shortened muzzle and have an affectionate and placid temperament. They are not known to be particularly demanding, but most will want to sit on your lap and be petted every day. 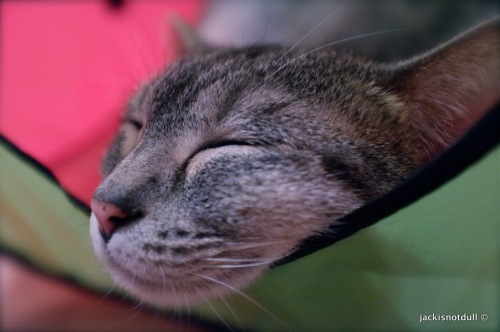 Lara is a Scottish Fold and American Shorthair cross with a lovable cub-like face. She is timid and rather pampered I was told. Awww…just a scaredy cat.

Roll, an Autumn 2009 baby, is an American Shorthair. She seems to be very pensive and has a penchant for sitting near the window for a view of the outside world. But as soon as she noticed my camera, she got rather shy and played cat and mouse with me. American Shorthairs are known for their quiet voices and adaptable personalities and generally do not like to be picked up. One of the cafe rules I was informed of earlier was to not attempt to carry the cats with collars on.

Hapineko is a fabulous concept, offering guests, especially wound-up ones like your truly, the bliss of therapy by our feline friends. Betcha you will leave smiling like a Cheshire cat.

One response to “A catty business”