Jack and Friends are back at Art Plural Gallery!

When we last visited the gallery, we were floored by the four levels of art. Argentinian-French artist, designer, architect and researcher Pablo Reinoso’s solo exhibition did not disappoint.

The well-attended exhibition on 14 January 2012 was graced by Ambassador of France in Singapore, His Excellency Olivier Caron. The exhibition stretched from 7.00pm to past 10.00pm, where choice champagne was flowing together with savoury pate and delectable cheese and cured meats. 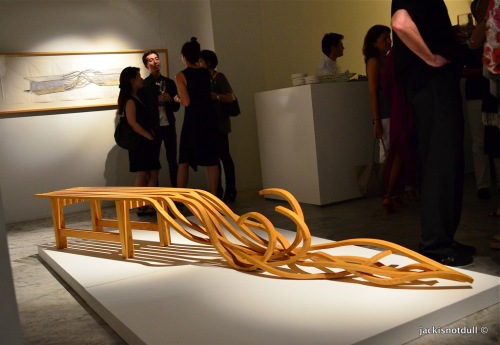 Reinoso uses a range of materials and the series featured in the gallery hosts sculptures made of bronze, wood, steel, aluminum, metal and even vegetable fibre. On the occasions where solid wood is the pre-dominant material, the wood is polished to reveal the most rhythmic wood grains, and lends an appealing and relatable earthiness to the overall appreciation of the sculpture. The clean lines of his sculptures suggest a Scandinavian aesthetic, if not for the free-spiritedness, echoing the organic evolution in nature itself, that make each of his works dynamic and wonderfully alive.

By challenging how typically industrial materials such as wood and metals are commonly perceived by humans; Reinoso’s sculptures are daring in how they defy conventions on how space is defined and he brings to the fore oft forgotten everyday objects such as benches, chairs or a spade. By highlighting their importance, his works create points of reflection for the viewer and are affectionate totems to celebrate life, and a reminder of how joy can be found even from the seemingly mundane. All you need is a change of perspective. Reinoso’s sculptures invite you on a journey into childhood, where disbelief is suspended and the innocence of imagination is entertained and finds permanence.

Many guests seem tempted to sit or touch the artworks, indeed the curves beckon, but hesitation persists because art exhibitions have their own set of social taboos. But then Reinoso sits on one of the works himself, the Aluminium Bench, to sign books and individually speak to guests. That breaks the ice, and suddenly there is a greater engagement and a sense of relief. Perhaps there is an awkwardness that resides deep within humans accustomed to viewing certain objects as art, versus purely moored in their functional roles.

It would seem, from his works, that he constantly questions life’s balance by seeking inwardly, while remaining acutely aware of life’s realities and social norms. Indeed, each of his works is quietly charming; blessed with spirituality, a natural elegance without a trace of loftiness and quiet humour that is devoid of sarcasm. Despite a sense of abandon, there is nothing superfluous about each sculpture; each metal curve or angle of wood grain bears importance to the entirety. As a series, his distinctive charm pervades, yet individually, they hold their own. 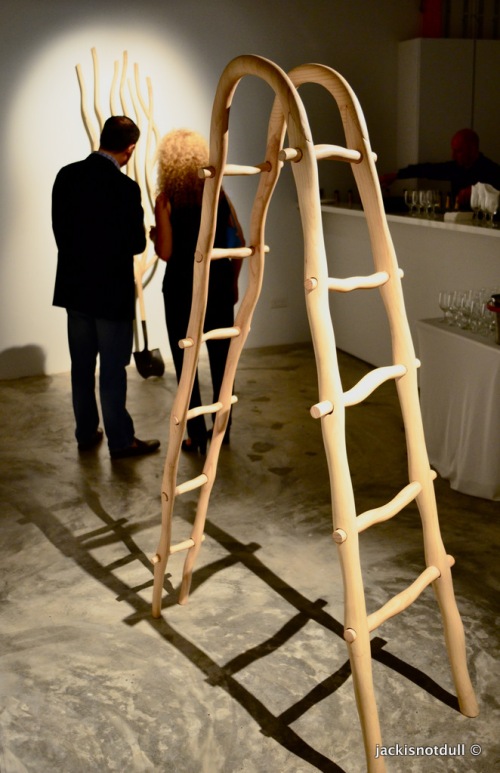 After conversing with Reinoso, his works are much like his manner; seemingly mild-mannered and unobtrusive at first glance, yet, a half-smile later, you are savouring the gentle questioning and observing his works beyond a spatial engagement. It is a knowing like a shared wink between friends.

Properly moved by his inquisition into harmonizing space/ form/ reality/ fantasy, I dedicated a poem to the artist.

Reinoso was touched by my poem a la serviette and Sharpie pen gift. It was the least I could do, for such an uplifting visual philosopher. 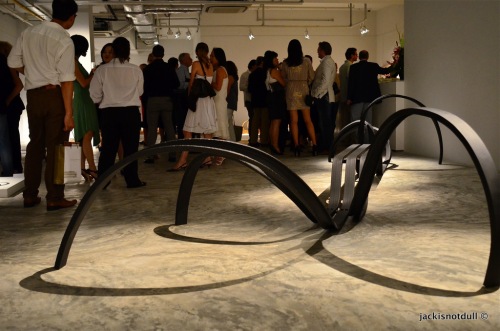 Allow yourself the visual respite.