Colour: The Language of Ian Davenport

Colour, the incorporeal attribute that complements form, texture and motion to shape our everyday world. Colour invigorates, adds dimension and conveys emotions. Under the right pair of hands, colour can be composed to spellbinding effect. In Singapore to open his inaugural solo exhibition in South-east Asia, the talented British abstract artist Ian Davenport shared with us his creative technique where colour takes centre stage. 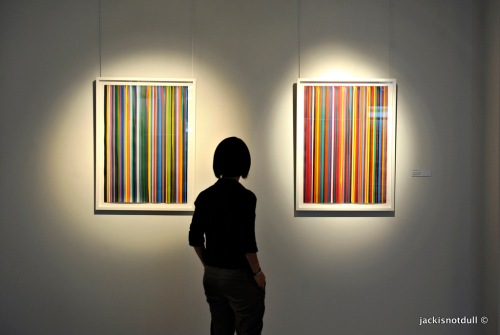 Ian Davenport is recognised for his exhilarating works of colourful straight lines created by pouring paint down a surface.

Perfected over years of rigorous experimentation and practice, Davenport’s innovative technique involves using an industrial syringe to release acrylic paint, one colour at a time, slowly and precisely from the top of a tilted flat surface while borrowing gravity to pull the paint down in straight lines.

This unorthodox way of handling paint as a medium grew from the artist’s fascination with how sculpture as an art form encouraged experimentation that challenged the boundaries of convention.

Drawing inspiration from objects around him such as flashy cars and street signs, famous paintings of Old Masters and even the sequence of vibrant colours from animation features such as The Simpsons, Davenport magically transforms his muses into dramatic works of colours. The artist’s dazzling choreography of colours for his works manifests from his unique flair for perceiving and deconstructing his environment into colour schemes.

In his “Puddle Paintings” series, the artist allows the paint to break the regularity of straight and distinct lines, and to pool and blend into intriguing formations of colours.

The euphony of colours that was so carefully orchestrated to present order and restraint and then permited to erupt into liberation demonstrates Davenport’s genius in the precision of his control and yet open-mindedness towards unpredictability.

Ian Davenport is well known for several large-scale commissioned works, notably a wall painting for the Department of Mathematics and Statistics at Warwick University and a 48-metre long painting for Southwark Council and Land Securities in 2006. His works can be found in many important collections worldwide.

Written by Jack.D
Photographed by aNonymoUS

One response to “Colour: The Language of Ian Davenport”