Truth be told, when I first met my boyfriend about a year ago and he told me he was from Albania, I was trying hard not to let my face give away my cluelessness about the country. Where? Oh, next to Greece? Ahh okay..Mediterranean. Not that I’m all that familiar with the Mediterranean, other than hummus. And couscous! 😛

I know I’m not alone in my knowledge inadequacy when it comes to Albania. Well, at least now I’ve learnt that Albanians do NOT like to be compared to the Greeks.

Claiming top spot in Lonely Planet’s 2011 top countries to visit is not the only reason this elusive country is on the brink of a tourism boom. With new coastal and mountainous roads being constructed, the country is becoming more accessible as scenic routes connect major cities.

With unemployment at a high of 13.3%, a few locals told me that there are actually more Albanians living and working outside of the country than there are in it. The Albanian diaspora, many of whom migrated during the collapse of the communist regime in 1991, can be found in Turkey, Italy, Montenegro, Greece, the US, UK, amongst other Western countries.

Although I tried my best to keep informed about the history of the country before going there so as not to appear like an ignorant tourist from another part of the world who’ll make inane comments, it just all got too confusing when intimidating words like “Byzantine”, “Ottoman” and “Kosovo” popped up in Wikipedia. Plus, I got distracted by the beautiful images of the coastline to concentrate on the past.

H2O Beach Bar. This is what I call a real beach bar, Himare.

So, I shall not delve into the nitty gritty of their history, which is tied to the Romans, the Turks and then the Communists, because it’s as messy and dense as the chest hair of an Albanian alpha male.

The adventure started when I realised I was the only Asian face at the airport baggage claim area. Even when I was in Bangladesh, there were some Chinese-looking people around. My Singapore passport, which has always been my golden ticket to being treated like royalty, had to be brought in to senior immigration staff to be scrutinised before being cleared. I might as well have been an alien from Mars. But of course, it was all done with the polite smile I received in no short supply in the week that followed, so no biggie. 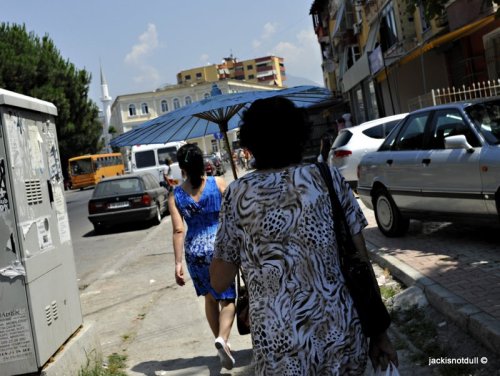 No Chinese in sight but random Chinese influences, like this paper umbrella, seeped into the country when diplomatic ties with China were strong during the Communist regime.

I was really ambitious when planning for this trip because I wasn’t sure if I would like it enough to make a second trip back. I thought I could cover Tirana, Pogradec, Korça, Gjirokastra, Berat, chill in Dhërmi, PLUS hop over to Greece…all in one week. But alas, the UNESCO World Heritage sites of Gjirokastra and Berat had to be skipped because The Boyfriend, who does not trust Lonely Planet, the Internet, Trip Advisor (only losers with too much time and complaints write in forums!) and basically anything that has progressed the travel industry, decided that any place UNESCO puts its stamp on is a ploy to trap tourists.

Eventually the list was trimmed down to Tirana and Dhërmi, with a day trip to Kruja and Petrela…basically to make up for his realisation, after being chided by his cousins, that Gjirokastra and Berat actually deserve their UNESCO status.

My first impression of Tirana was rather surreal as we went on a walking tour of the old part of the city. Narrow back-alleys lined by seemingly incomplete Soviet-style architecture and pre-Communism period houses felt like I stepped through a time machine. 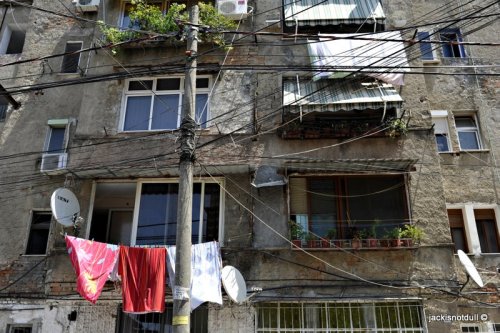 Very old houses in the typical Tiranian style. Was told that this type is at least 120 years old.

Totally different scenery at the shopping district in the new part of town.

Colourful “artwork” on several buildings in the capital can be attributed to the ex-mayor of Tirana, Edi Rama, who was apparently a painter (wikipedia). Albanians have a joke about how he painted the city like his socks. One of the more bizarre paint jobs is a green building with yellow arrows all over which locals refer to as “the building with arrows”.

I noticed after a couple of days that all the old men in the city seemed to sport the same look. Wrinkled, sun-drenched olive-toned skin, crisp shirts, sunglasses, fedora and steady gait, looking like they have somewhere important to go to. Didn’t manage to get a photo because I half-suspected they could have mafia links.

Another characteristic of Albania that becomes very apparent after a few days of walking around the capital Tirana is the fact that there are very strong sentiments about hanging on to the old ways. Take for example their currency, the Lek. For the first time in my life, I learnt that money can be ambiguous. For a cup of expresso that costs 100 lek on the menu, the waitress will say “1000”, which will first give you the shock of your life (SGD11 for coffee?!!), then make you highly wary that you’re being ripped off. But she says it with the most smiley honest face that soon that feeling of being beguiled passes and then confusion sets in.

The explanation for this is that Albanians still talk in old currency, which has a value of ten times more than the “new” lek. Not that the “new” lek is really new. It has been around since 1965. And just in case one isn’t confused enough, 6500 (new) lek is quoted as “65”. I was given a half hour long lesson on how to interpret old lek but still managed to get minor heart attacks when prices were read out to me. In the end, the best explantion offered to me *with a wicked smile* was “it depends on the context”. 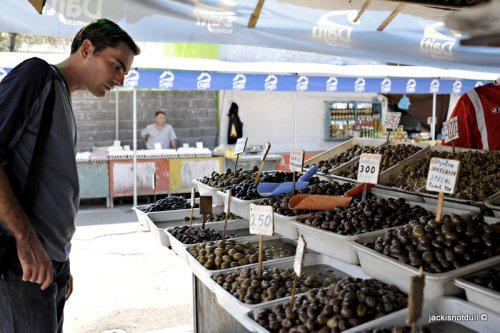 What’s for dinner? Olives or olives?

Olives of all shapes and sizes sold at the New Market, Tirana. Again, don’t be fooled by the adjective “new” because it has actually been around since the 1920s. There’s also a landmark that locals refer to as “Chinese Canteen” which is now the corner of one of the central streets in Tirana. No, it isn’t a street full of Chinese restaurants. It used to be the canteen for Chinese staff working in that area in the 70s.

One of the most awesome things about this country, which I must really salute to and I hope never changes, is… *drumroll* 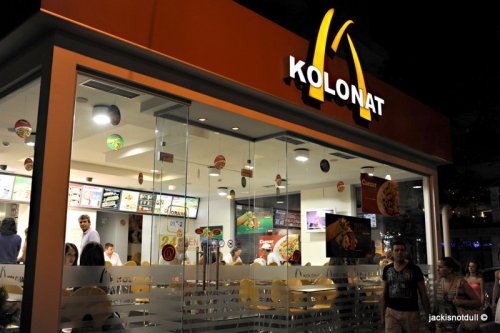 Clearly pertinacious against globalisation and Americanisation.

I did taste the local spin-off of KFC, which is AFC =Albanian Fried Chicken 🙂 but it was bad. Ahh well. I was told that apparently Ronald asked for too much for their franchise so one dude decided that he doesn’t need to be bullied by them and then set up Kolonat (which means columns), a copy right down to the golden arches.

According to my Albanian man, the “qofte” has saved the country from fast food monopoly in the likes of Macs and KFC. The “qofte”, or “kefta” in greek, is a longish meatball (usually beef) that is eaten with bread. Can be eaten as a snack. Who needs a Big Mac when you’ve got the qofte?

This would be a typical home-cooked Albanian meal. (from left) Chicken rice, salad (with olives and cheese), Tarator (yoghurt with cucumber, garlic, olive oil, lime; used as a dip for bread), and Turli (meat stew). Total cost per person: 500 Lek ~SGD5.60 ~USD4.50

The meal above would be eaten in a traditional “gjelltore” (pronounced gel-tor-ray), which is kinda like the equivalent of a coffee shop. No way you’ll know what you’re ordering if you don’t speak Albanian cos it’s a local hangout type of place. Sells typical home-cooked Albanian dishes at very affordable prices. And looks like someone’s dining room. When the food is served, the waitress will say “Të bëftë mirë”, which translates to “To you may it do good.”

Chilling the day away drinking coffee and people-watching 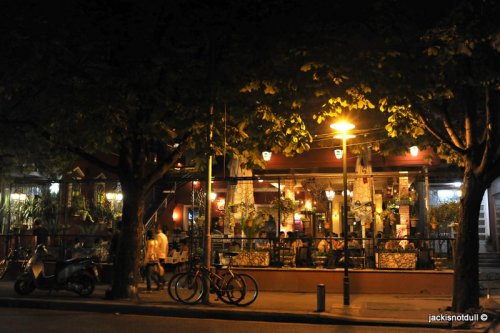 Vibrant night life with no shortage of hip cafes, restaurants and bars with young people there just to see and be seen.

Written and photographed by p.jane