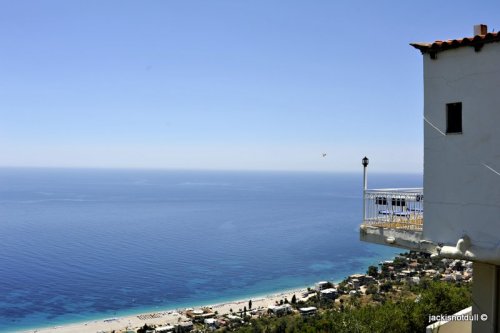 Perhaps not so much of a secret anymore, the stretch of beach in south Albania facing the Ionian Coast is a Club Med-ish paradise. Read that there are plans for the resort chain to set up one soon, which would just mean prices will sky rocket as more foreign tourists stream in. Already in the past decade, the scene has changed drastically as restaurants and guesthouses line the beaches, aided in part by the new mountainous road joining Vlora to Saranda that follows the coast, making it accessible for anyone whose stomachs can take a bit of motion sickness.

We chose to park ourselves at Dhërmi beach, which I thought was the best option because although there were only a few guesthouses and restaurants, it was not crowded and the beach was large.

The beach is a 2 km walk downhill from the Vlora-Saranda road and the turnoff is rather inconspicuous without any proper signage, so it can be easily missed. At some points, the incline of the slope down is 30 degrees, I swear, so it’s not for the weak-kneed for sure.

We stayed at one of the guesthouses which was right at the beach. Cost us about 45 euros for a double room, as compared to 30 euros for one of those along the slope. For that 15 euros extra, it’ll save you climbing up and down the 30-degree inclined slope to the beach, so I say it’s worth every penny.

Instead of sand, Dhërmi has pebbles, which is quite painful to walk on…a little like those foot reflexology paths. 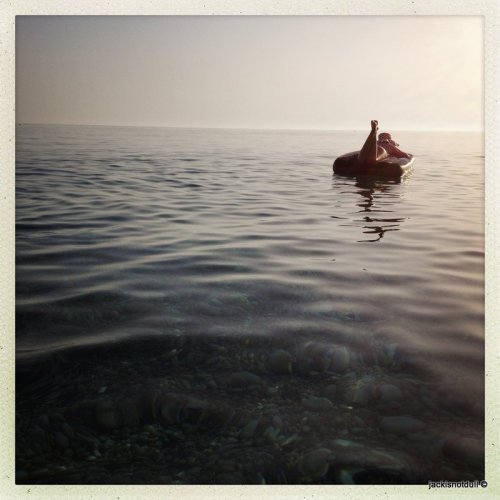 Checklist on what to bring for an Albanian beach holiday: sunglasses, huge hat, sunblock, beach towel, goggles/snorkling gear, water shoes like these to protect your feet from the pebbles and random shards of metal, air mattress to lie on the water, and a good book.

The water is pristine, clear, cool, perfect. The sea floor is visible to the naked eye even 30m out at sea. 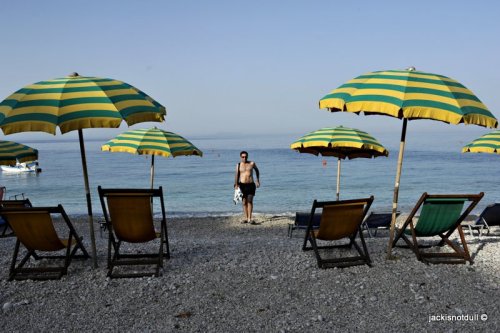 Deck chairs owned by the respective guesthouses dot the beach, tempting you to spend the day lazing on them.

We decided to hop onto a furgon/ mini bus the next day to the town of Himare. The drive was about 20 min, although the waiting for the bus was about half an hour. The waiting place is at the turnoff along the Vlora-Saranda road. The friendly drink stall lady nearby will try to tell you when the next bus is but timings are irratic, so a cup of coffee or raki from her will keep you company while you wait.

Upon reaching Himare, I realised we made a good decision of staying in Dhërmi. Himare is more crowded with local tourists, although the beach is smaller as the sleepy town has more hotels and amenities. There is the fantastic H2O Beach Bar in Himare, but I think for a good beach, I’d say Dhërmi is better.

Plus, Dhërmi has the Havana Beach Club.

Inviting wood panels and floor, warm lighting, plush sofas, tasteful beats, good-looking young people, great cocktails and the stars above your head…what more can you ask for in a club?

I get a sense that there’s a very strong party culture amongst Albanian youths. During the evenings, the numerous bars and clubs in the capital are packed with self-consciously well-groomed young women and men, even on weekdays. It is common to bar-hop, up to four or five places in one night. Because of the high expectations Albanians place on the quality of the establishments that they patronise, it seems like every cafe/ restaurant/ bar/ club is competing to better the next one.

I was told that SGD1,600 (~USD1,285) would be considered a “good” salary. Cocktails on average cost about SGD7, an espresso costs SGD1, lunch at a relatively good restaurant costs about SGD10.  Seems like saving isn’t big on the agenda over there. Enjoying life comes first.

Upon returning to Tirana, we took a day trip to Kruja (pronounced kru-ya). The town is where you get Skanderbeg-overload. Less than an hour’s drive from Tirana, it’s the birth town of the national hero who resisted multiple Turkish invasion attempts until his death. His legacy lives on as the double-headed eagle motif on the Albanian flag, which is his family’s coat-of-arms.

Besides a Skanderbeg museum which houses dusty artifacts and busts of national heroes, with explanations mostly in Albanian, the other highlight of this town is the bazaar.

A woman making a traditional print qilim (rug) by hand on a loom.

Souvenirs sold in the shops include antique (looking) bells, pipes, the odd piece of jewellery, traditional costumes, and bunker ashtrays. Bunkers? Strange right. If your eyes are sharp enough, you’d notice that bunkers built between 1950 to 1985 dot the landscape of this country in such a ubiquitous manner that they’ve even taken on iconic status. A legacy of the previous regime, these are so resistant (and expensive to remove) that it takes one man three months of weekend and after-hours work to demolish one by hand (lonelyplanet).

We proceeded to the tiny town Pretrela. It’s not on Lonely Planet and I have no idea how to get there by public transport. 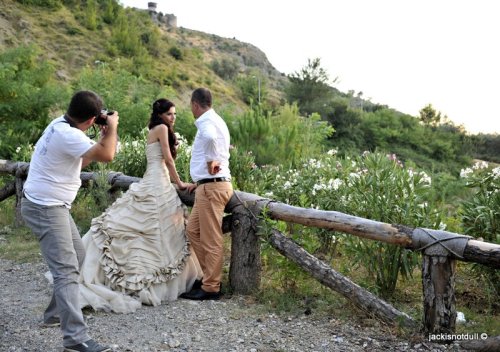 A couple takes their wedding shots against the backdrop of the beautiful rolling Petrela countryside.

This is the restaurant at Petrela Castle. Some clever entrepreneur somehow managed to buy the rights to convert this ancient castle, where Skanderbeg’s sister used to stay in, into a restaurant in the skies. The only way to reach it is a 15 min hike up a steep hill. The waiter told us that food and supplies are brought to the restaurant via a goat every morning. Vegetables are grown on site and meat is killed and cooked upon ordering!

I suggest not to shy away from the fried sheep brain, considered a delicacy, for kicks as well as bragging rights. It wasn’t cheap to eat there but what a fantastic way to end off our Albanian adventure!

Written and photographed by p.jane